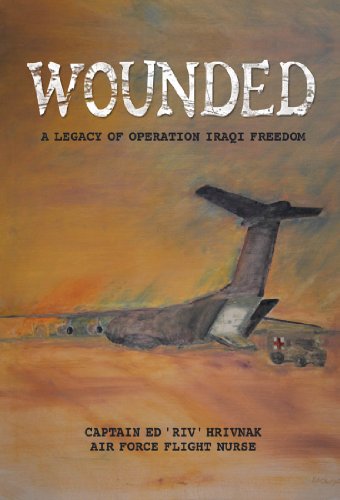 Wounded is an eloquent, gritty account of the ordeal suffered by injured American soldiers during Operation Iraqi Freedom. The human elements of courage, love, fear, and sacrifice paint an intriguing picture of the reality of war. Author Ed Hrivnak, a flight nurse witness to the pain and suffering, offers a heroic narrative for the reader. There are valiant accounts of battle followed by the reality of life altering injuries, and how troops support each other and persevere.

Wounded closes all gaps between the reader, the injured troops in the field, and the medevac personnel helping them during their darkest hours. The book offers a unique look at what it was like to evacuate wounded at the start of Operation Iraqi Freedom. Hrivnak wants the reader to fully understand the price of war. This international odyssey transcends the casualty statistics forgotten in the news. A wounded soldier is a human being who is vulnerable and weakened. Those who care for them, at times struggling to maintain life, are also scarred. These men and women are an incredible source of strength, courage, and devotion.

Author's Biography
Ed Hrivnak, RN, penned WOUNDED while caring for soldiers that were injured in Iraq. Portions of WOUNDED have appeared in the critically acclaimed anthology Operation Homecoming and the two-time Emmy winning film of the same name. The movie was nominated for several awards, including an Oscar for best documentary feature.
Part of his work is featured in the National Endowment of Humanities 2013 anthology Standing Down. This is a collection of significant works of military literature chosen to assist veterans with the transition to civilian life. The book comprises selections from literary giants that include Homer, Tolstoy, Lincoln, and Hemmingway.
Ed's words have been published in the New Yorker, the Seattle Times, the Tacoma News Tribune, the Pittsburgh Post-Gazette, and several international nursing journals. His war stories have aired on PBS, NPR, ABC World News, and numerous talk shows.
His writing was featured in theatrical presentations at Tacoma's Broadway Center for the Performing Arts, and the adaptation Soldier's Circle was performed at the University of Louisville.
Hrivnak was an instructor flight nurse in the Air Force Reserve. He retired as a captain after twenty years of service. A veteran of the first Gulf War and Operation Iraqi Freedom, Ed also participated in peacekeeping missions supporting Somalia, Rwanda, and the Balkans. Combining his military and civilian flying career, the author has logged over four thousand flight hours on twenty different types of aircraft. Much of his published work is based on treating casualties out of the Middle East.
Prior to retiring, Captain Hrivnak conducted research for the Assistant Surgeon General's Office of the US Air Force on the stress of caring for combat casualties. He has lectured at colleges, trauma conferences, and to international audiences on this subject.
The writer is married to nurse practitioner and three-tour veteran Lieutenant Colonel Jennifer Hrivnak. They live in the Pacific Northwest. The Hrivnaks have two young children, John Dawson and Shae Marie. Ed enjoys his time off with family, skiing, and flying helicopters and antique airplanes. Hrivnak continues to serve his country as a Firefighter.