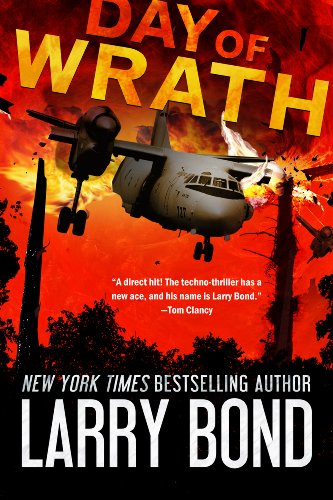 Prince Ibrahim al Saud is a member of the Saudi Royal family, a successful businessman with vast wealth and contacts throughout the West’s political and business circles. He also sponsors terror attacks using his wealth and companies to organize killings and bombings around the world. Now he’s about to launch his most deadly plan: Using nuclear bombs smuggled out of the former Soviet Union, he plans to deliver them to military bases throughout the United States. Not only will the damage to American armed forces be catastrophic, but the collateral damage to nearby US cities will kill hundreds of thousands, perhaps millions.

Peter Thorn and Helen Gray, working together to solve the death of a nuclear weapons inspector in Russia, find unexplained threads that make them a threat to Saud’s plan. Their investigations put them on the wrong side of official Washington, exacerbated by a corrupt official within the FBI. Convinced of what they have discovered, the fugitives must avoid arrest long enough to find the missing pieces of Saud’s plan and stop it before he devastates the USA.


“DAY OF WRATH may be his best novel yet. … Larry Bond stands out as the writer most able to forge an exciting, post-Glasnost story … a feel for the deadly forces of our brave new world that many other authors can only envy.”
—James Grady, author of Six Days of the Condor and River of Darkness

“Nail-biting … pretty darn cool … If you’re like me, you've continued to enjoy Larry Bond’s thrillers. … The resourceful Thorn and the sturdy Gray will do nicely.”
—Bookpage

“Fortunately Larry Bond has a new book out and it may be his best yet. … In fact, he’s giving Tom Clancy a real run for his money. … Bond really delivers here. … It is fair to say he’s getting better with each new book. … Terrorism, politics, violence, romance, who could ask for more?”
—Houston Public News

“Our next true master of suspense.”
—Tom Clancy

“A master of suspense … Bond tells a hair-raising tale … all too real.”
—West Orange Times

“A master storyteller.”
—Steve Emerson, co-author of The Fall of Pan Am 103

“Larry Bond seems to know everything about warfare, from the grunt in a foxhole to the fighter pilots far above the earth.”
—New York Times Book Review

“Bond places in the top of the genre.”
—Copley News Service