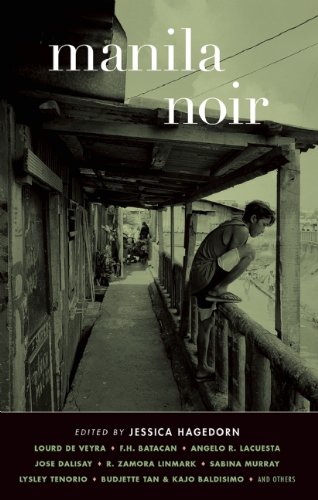 Winner of the National Book Award for Best Anthology from the Manila Critics Circle!

"While certain cities in past Akashic volumes might appear to lack an obvious noir element, Manila (like Mexico City, which shares many of the same problems) practically defines it, as shown by the 14 selections in this excellent anthology. As Hagedorn points out in her insightful introduction, Manila is a city burdened with a violent and painful past, with a long heritage of foreign occupation. The specters of WWII (during which the city suffered from U.S. saturation bombing), and the oppressive 20-year reign of dictator Ferdinand Marcos live on in recent memory. The Filipino take on noir includes a liberal dose of the gothic and supernatural, with disappearance and loss being constants."
--Publishers Weekly (starred review)

"For those who love travel, history, and a little bit of lore, this anthology transports you to the Philippines and is filled with riveting and sometimes dark stories of the capital city."
--Glamour (Summer Reading pick)

"Suffice it to say that what the Noir series in general, and Manila Noir in particular, does so well is to create a 360-degree mosaic of a place...By including so many perspectives, from so many walks of life, Manila Noir makes Manila seem as vibrant, and dangerous, and exciting, and confounding as it really felt to live there."
--Lit Wrap

Akashic Books continues its groundbreaking series of original noir anthologies, launched in 2004 with Brooklyn Noir. Each story is set in a distinct neighborhood or location within the city of the book.

From the introduction by Jessica Hagedorn:

"Manila's a city of survivors, schemers, and dreamers...A city of extremes. Where the rich live in posh enclaves, guarded by men with guns. Where the poor improvise homes out of wood, tin, and cardboard and live by their wits. Where five-star hotels and luxury malls selling Prada and Louis Vuitton coexist with toxic garbage dumps and sprawling 'informal settlements' (a.k.a. squatter settlements), where religious zeal coexists with superstition, where 'hospitality' might be another word for prostitution, where sports and show business can be the first step to politics, where politics can be synonymous with nepotism, cronyism, and corruption, where violence is nothing out of the ordinary, and pretty much anything can be had for a price--if you have the money and/or the connections, that is...

As you will see from this steamy collection of stories, all these delicious contradictions serve to enrich and expand our concept of noir. What you will also find are the noir essentials: alienated and desperate characters, terse dialogue, sudden violence, betrayals left and right...All the fabulous and fearless writers gathered here have a deep connection and abiding love for this crazy-making, intoxicating city. There's nothing like it in the world, and they know it."