Showing The Caretaker by A .X. Ahmad 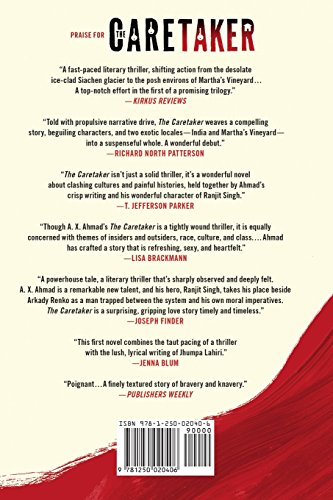 Who is the caretaker hiding in the shadows of the Martha's Vineyard mansions he tends? Back in India, Ranjit Singh commanded an elite army squad. But that was years ago, before his Army career ended in dishonor, shattering his reputation. Driven from his homeland, he is now a caretaker on the exclusive resort island of Martha's Vineyard, looking after the vacation homes of the rich and powerful. One harsh winter, faced with no other choice, he secretly moves his family into the house of one of his clients, an African-American Senator. Here, his wife and daughter are happy, and he feels safe for the first time in ages. But Ranjit's idyll is shattered when mysterious men break into the house. Pursued and hunted, Ranjit is forced to enter the Senator's shadowy world, and his only ally is Anna, the Senator's beautiful wife, who has secrets of her own. Together, they uncover a trail of deception that leads from the calm shores of the Vineyard to countries half a world away. And when his investigation stirs up long forgotten events, the caretaker must finally face the one careless decision that ruined his life- and forced him to leave India. A gripping tale of hidden histories, political intrigue and dangerous attractions, A. X. Ahmad's "The Caretaker "introduces a new hero for our times: an immigrant caught between two worlds and a man caught between two loves.