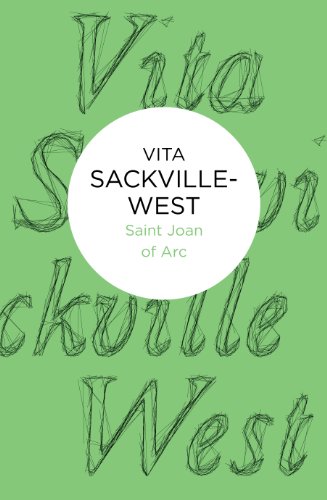 Vita Sackville-West wrote Saint Joan of Arc in 1936 at the age of forty-four, and had, at that point, already been writing for thirty years. At fourteen, Sackville-West published her first book and, at fourteen, Joan of Arc first heard the voices. Joan was seventeen when she took command of the armies of France--a peasant girl in the early fifteenth century in charge of a nation's forces. At nineteen she was captured by the British and tried as a witch by a church court. Before her twentieth birthday she was burned at the stake. In 1920 she was canonized by the Roman Catholic Church as a saint.

In a clever, brisk voice, Vita Sackville-West tells the triumphant story of a French peasant girl, raised in a country torn apart by the Hundred Years' War, who rose from poverty to military greatness. With dazzling insight and clarity, Sackville-West breathes new life into Joan of Arc's beautiful and tragic story.

Famous for her exuberant aristocratic life, her strong marriage to Harold Nicholson, her passionate relationships with women and her gardens at Sissinghurst Castle, Vita Sackville-West is an icon of the early twentieth century. A poet, novelist and biographer, four novels and two biographies by this classic author have now been republished by Bello