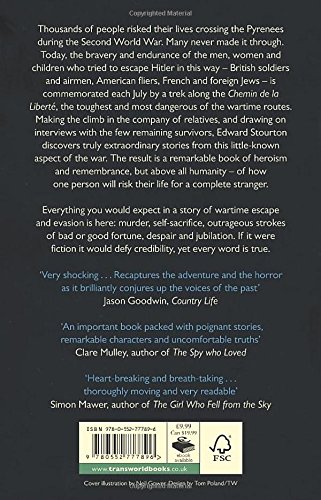 The mountain paths are as treacherous as they are steep - the more so in the dark and in winter. Even for the fit the journey is a formidable challenge. Hundreds of those who climbed through the Pyrenees during the Second World War were malnourished and exhausted after weeks on the run hiding in barns and attics. Many never even reached the Spanish border. Today their bravery and endurance is commemorated each July by a trek along the Chemin de la Liberte - the toughest and most dangerous of wartime routes. From his fellow pilgrims Edward Stourton uncovers stories of midnight scrambles across rooftops and drops from speeding trains; burning Lancasters, doomed love affairs, horrific murder and astonishing heroism. The lives of the men, women and children who were drawn by the war to the Pyrenees often read as breathtakingly exciting adventure, but they were led against a background of intense fear, mounting persecution and appalling risk. Drawing on interviews with the few remaining survivors and the families of those who were there, Edward Stourton's vivid history of this little-known aspect of the Second World War is shocking, dramatic and intensely moving.