Showing Alone in a Crowd by Carol Lynne 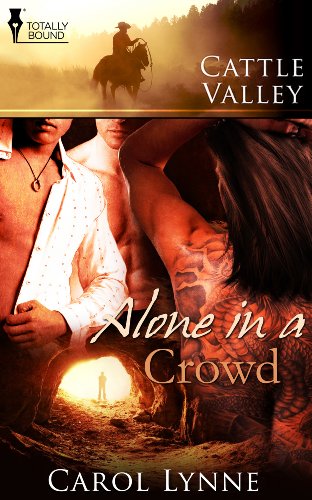 Welcome to Cattle Valley, an alternative, private community where your sexual preference isn't an issue, it's the size of your heart that counts.

The city of Cattle Valley was founded by millionaire Charles Beauregard on behalf of his only son and heir, Joshua Beauregard. The victim of a hate-crime, Joshua was murdered on April 13, 1972 in San Francisco, California. After the murder of his son, Charles began making plans to use his wealth and land to insure a safe haven for gays and their families to live in peace. Charles spent the remainder of his life working and seeing that his vision came to fruition.

Drop by for a visit, and say hello to our sheriff, Ryan Blackfeather and his two partners, Nate Gills and Rio Adega. Or perhaps you’d rather have one of Kyle Brynn’s famous cinnamon rolls at Brynn’s Bakery. Whatever you’re in the mood for, you’ll find it here.


Alone in a Crowd by Carol Lynne

For years, Ryan Blackfeather prided himself on maintaining his composure no matter the situation. He has built a life around his desire to be needed, to feel important to those around him. His job as sheriff and the love of his partners, Nate and Rio, not only fulfill him they give him purpose. So why when he receives a phone call with tragic news does their love and support not comfort him?

The more Rio and Nate pressured him to talk about his sudden surly mood, the more Ryan began to resent them. The answer came at the height of a heated argument, it was time to return to the place and the people who first made him feel like he had nothing to offer. Only then would he figure out why he’d spent a lifetime searching for the acceptance of those around him.

Insisting he tackle his past on his own terms, Ryan returns to Oklahoma to face the demon, the one man in the world he could never please.

Of all the stories about Ryan, Rio, and Nate, this is the one that touches me the most...I truly enjoyed this book and recommend it, not just to Cattle Valley fans, but to everyone who appreciates a story with three men, very devoted to each other, who will stop at nothing to ensure their partners happiness