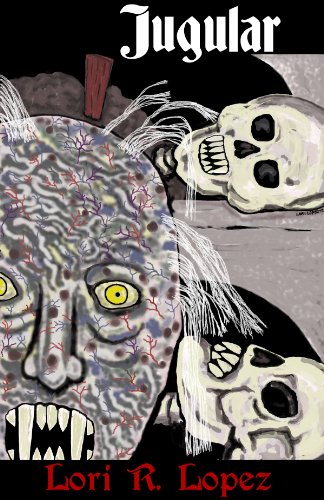 "Jugular" is a novelette about a woman whose life has never been normal, from childhood to childbirth. Her mother locked her in a box. Her son is a serial killer. Then things take a turn for the worse and she wakes up dead. Or rather, undead. From there it goes downhill. Way down.

What do you do when you meet the mother of all hags and learn she's your great-great-great-great-great-something-grandmother? But that isn't Magda's biggest problem. Her life is going through some major "changes", including that she just woke up in the morgue. Oh yeah, she's also a vampire. Told with creative language, a blending of artistic prose and dark humor, this horror-fantasy novelette is the beginning of a trilogy, yet each of the three parts is a stand-alone story. Edgy and gruesome, "Jugular" will take you beyond the grave for an unusual take on a popular mythos. Although rooted in Romanian history, it is a modern Gothic narrative that breaks the mold, rewriting the vampire legend as a hereditary disease where females are the true vamps, coming into their powers or next blood phase at "The Change Of Life". But, like an insect colony, there can be only one "queen".

WARNING: Some content may be disturbing to sensitive readers.