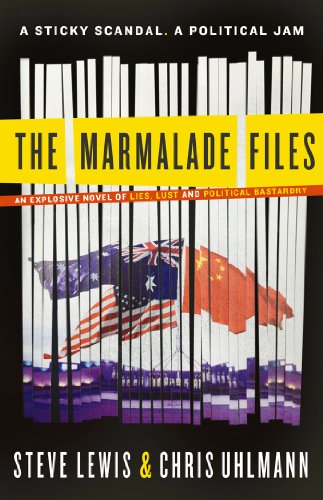 Soon to be a major TV series from the team behind The Slap!

A sticky scandal. A political jam. An imaginative romp through the dark underbelly of politics by two veteran Canberra insiders.

∗the Marmalade Files are documents that allegedly exist within the bowels of Foreign Affairs & trade that have been around for a half century.

When seasoned newshound Harry Dunkley is slipped a compromising photograph one frosty Canberra dawn he knows he's onto something big. In pursuit of the scoop, Dunkley must negotiate the deadly corridors of power where the minority toohey Government hangs by a thread - its stricken Foreign Minister on life support, her heart maintained by a single thought. Revenge. Rabid Rottweilers prowl in the guise of Opposition senators, union thugs wage class warfare, tV anchors simper and fawn ... and loyalty and decency have long since given way to compromise and treachery.

From the teahouses of Beijing to the beaches of Bali, from the marbled halls of Washington to the basements of the bureaucracy, Dunkley's quest takes him ever closer to the truth - and ever deeper into a lethal political game.

Award-winning journalists Steve Lewis and Chris Uhlmann combine forces in this arresting novel that proves fiction is stranger than fact.

Praise for the Marmalade Files:

'A banquet of bastardry' Daily telegraph
'[A] cynical, opinionated, lively gallop through the landscape of contemporary Australian politics' Sydney Morning Herald
'Lewis and Uhlmann use the familiar circus of malevolence and blunted expectations to draw the reader into the bigger story of Australia and its place on the perilously shifting ground between China and the US' Weekend Australian
'A rollicking good story' Good Reading