Showing The Blood of Free Men: The Liberation of Paris, 1944 by Michael Neiberg 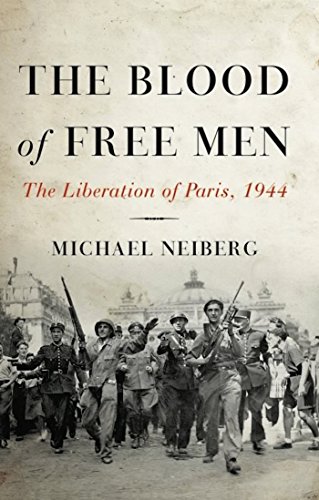 In The Blood of Free Men, acclaimed historian Michael S. Neiberg provides a thrilling new history of the Liberation of Paris, showing how a host of brave fighters, commanders, and officials saved the city and, in the process, shaped the outcome of World War II.

The Liberation of Paris was a chaotic, complex operation that could have easily ended in the city’s ruin. Paris was only spared from being turned into a rubble-heap thanks to the efforts of a complex network of players, some of whom seemed to be working against each other. While the Allied Forces largely ignored Paris (focusing instead on reaching Germany), the French themselves were deeply divided. French political cells competed for control of the Resistance within Paris. Outside the city, Charles de Gaulle and his Free French Forces aimed to direct the Resistance and establish themselves at the head of France upon its liberation.

Determined to stop these fragmented forces was the occupying German army, which clung to Paris with ever more ferocity as the Allied army approached from its Normandy beachhead. As Neiberg demonstrates, the Germans were at first far more concerned with Paris’s well-being than were the Allies. Paris had been a relatively minor strategic priority for the Allies in the broader scope of the war, but as a major transportation hub for German troops and materiel in the region the city was critical to Germany’s stranglehold on France. German commanders knew that, in order to move their forces freely within those parts of western Europe still under Axis control, they would have to keep Paris intact and in order for as long as possible. Many French citizens had themselves been content to forego outright confrontation with the occupiers in favor of city-wide stability; most Parisians lived alongside German troops in relative peace for the early years of the war. But that façade was broken by the time the Allies flooded into Normandy.

Hammered by deadly Allied bombing raids and starved by food shortages (which were only exacerbated by the appetites of German troops), many ordinary Frenchmen decided to act. Electrified by news gleaned furtively from the BBC, Parisians began to stand up to the Germans. Paris’s policemen, many of them also Resistance members, stopped enforcing the Germans’ repressive laws, forcing the SS and Gestapo to do their dirty work themselves. Tensions finally boiled over on August 19, when a group of brave Parisians—mostly policemen and Resistance fighters—faced off against their occupiers. It was a dangerous gambit, as Hitler had ordered the city’s military leadership to destroy Paris rather than let it fall. Indeed, Neiberg reveals that, contrary to popular conceptions (which hold that Dietrich von Choltitz, the city’s military governor, had never intended to obey Hitler’s orders), the mounting chaos may have actually have led to the city’s demolition. Tragedy was only averted by the intervention of Swedish Consul General Raul Nordling. Neiberg shows how the oft-overlooked Nordling brokered a ceasefire with von Choltitz, buying the Allies the time they needed to make it to the city—and thereby saving Paris from the fate Hitler had planned for it.

Tracking the movements of entire armies as well as the machinations of individuals on the ground, The Blood of Free Men provides an arresting narrative of the Liberation, as well as an authoritative explanation of its place in the scope of World War II and in French history at large. Gripping, fast-paced, and populated with unforgettable characters, it tells the full story of one of the war’s defining moments, when a tortured city and its inhabitants stood up to reclaim their liberty.