Showing Moscow: A Cultural and Literary History (Cities of the Imagination) by Caroline Brooke 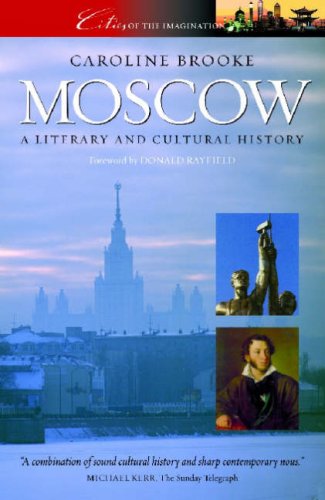 From its origins as a twelfth-century hilltop fortress or kremlin at the confluence of two rivers, Moscow has grown to become a vast city of over eleven million inhabitants. After suffering the ignominy of losing its capital city status in the early eighteenth century under Peter the Great and invasion by the French in 1812, Moscow later became the centre of the communist world. Following the collapse of the Soviet Union in 1991, it has been busy emulating the wildest capitalist excesses of Las Vegas with colourful results. Muscovites have given their city many names: Holy Moscow for its status as a major centre of the Orthodox Church; Moscow of the Taverns, famed for its hospitality and carousing; Calico Moscow with the dominant textiles trade; the "big village" with its growing population of peasant migrants; the "Red Moscow" of the Soviet period. Today, these many different influences have left layer upon layer of contradictory symbols - Orthodox, tsarist, Soviet and capitalist - which impregnate the very fabric of the city. Caroline Brooke explores the way in which Moscow has reinvented itself over the years, and the fascination it has exerted over the many writers, artists and composers who have made the city their home. It is a city of monasteries and palaces - from the churches and cathedrals of the Kremlin and Red Square to the great walled monasteries that encircle the city's southern approaches. It is a city of upheaval and unrest - the coups and rebellions of the seventeenth century; the 1771 plague riots; the revolutions of 1905 and 1917; the Moscow panic of 1941; the collapse of the Soviet Union. It is also a city of writers, theatre and music: Pushkin, Tolstoy, Chekhov, Pasternak; the Bolshoi Theatre; composers Tchaikovsky, Rachmaninov, Prokofiev and Shostakovich; the guitar poets, Okudzhava and Vysotsky.