Showing The Battle of El Alamein: Decision in the Desert by Correlli Barnett 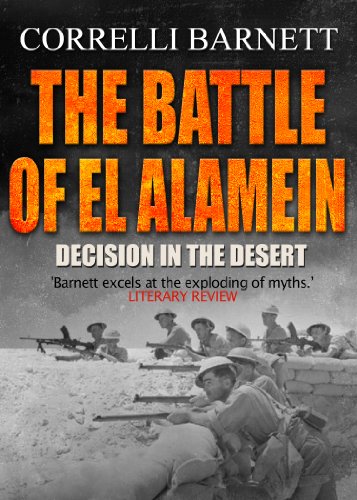 The eight-month siege was over. The squat, squealing armoured tanks of the Panzerarmee Afrika had finally broken British resistance and ground their way to the Mediterranean coast. Quick to press his advantage, Lieutenant-General Erwin Rommel, the legendary Desert Fox, issued new orders: “Fortress of Tobruk has capitulated. All units will reassemble and prepare further advance.”

During the next week, Rommel’s war machine clicked with deadly precision. Sudden, swift, shrewdly-manoeuvred thrusts drove the British Eight Army back to El Alamein, just sixty miles from Alexandria, Egypt. Here Rommel was to meet head on with his most wily adversary, Lieutenant-General Bernard L. Montgomery.

This book brings into focus one of the major campaigns of World War II. It presents an incisive account not only of the battle of El Alamein – the climax of the war in North Africa – and the events leading up to it, but of what was at stake for the Allies and for Hitler. If Montgomery could not hold Rommel at El Alamein, the crucial Middle East might fall to the Axis powers. The lifeblood of the whole mechanized war petroleum – and the rich oil fields of the Middle East would provide the Nazis with the fuel they needed so desperately.

In the following months, hope of decisive victory flickered mirage-like over the blazing desert sands. The war against the sun, the heat, the severe shortage of water, the swarms of viscous black flies seemed as relentless as the actual fighting. It was not until October 23rd that Montgomery launched an all-out offensive. A thousand guns, 1100 tanks and 220,000 men then stormed through the German minefields to pommel the Panzerarmee Afrika. AS his men were retreating in disorder, Rommel received some shocking news: on November 8th, General Dwight D. Eisenhower’s Anglo-American forces had invaded Morocco and Algeria. In the German’s own words, “This spelled the end of the army in Africa.”

'[Barnett] is our eminent military historian.’ The Times

Correlli Barnett is the author of highly-praised history books, such as 'Marlborough', 'The Desert Generals', 'The Swordbearers' and 'Britain and her Army'. He was historical consultant and part author of the BBC series 'The Great War' and won the 1964 Screen Writers' Guild Award for best British television documentary script. He lives in Norfolk.