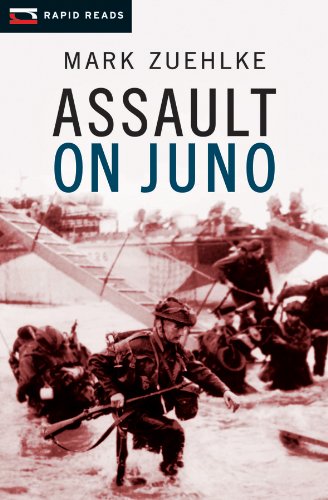 Dawn, June 6, 1944. Off the Normandy coast 6,500 ships carry 150,000 Allied troops. This is D-Day, the long-awaited Allied invasion of German-occupied Europe. The Allies will storm five beaches. One is code-named Juno Beach. Here, 14,500 Canadians will land on a five-mile stretch of sand backed by three resort towns. The beach is heavily protected by a seawall, barbed wire, underwater obstacles and hundreds of mines. Behind these defenses a heavily armed German force waits inside thick concrete pillboxes and deep trenches that bristle with machine-guns and artillery pieces.

About 3,500 Canadians will lead the way. The fate of the invasion is in their hands. They either break the German defenses or die trying. Piling out of small, frail landing craft, they struggle through bullet- and shell-whipped water to gain the sand. And the bloody battle for Juno Beach begins.

With his trademark you-are-there style, acclaimed military historian Mark Zuehlke plunges readers into a vivid and powerful account of the day-long battle that put the Allies on the march toward victory in World War II.