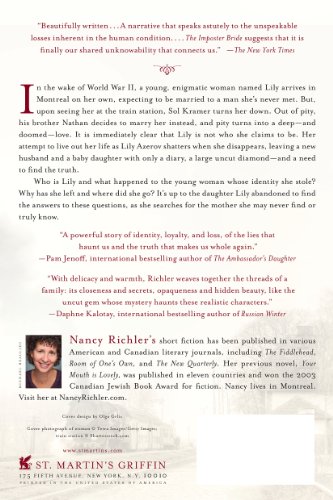 In the wake of World War II, a young, enigmatic woman named Lily arrives in Montreal on her own, expecting to be married to a man she's never met. But, upon seeing her at the train station, Sol Kramer turns her down. Out of pity, his brother Nathan decides to marry her instead, and pity turns into a deep and doomed love. It is immediately clear that Lily is not who she claims to be. Her attempt to live out her life as Lily Kramer shatters when she disappears, leaving a new husband and a baby daughter with only a diary, a large uncut diamond--and a need to find the truth.Who is Lily and what happened to the young woman whose identity she stole? Why has she left and where did she go? It's up to the daughter Lily abandoned to find the answers to these questions, as she searches for the mother she may never truly know, in "The Imposter Bride "by Nancy Richler.*Winner of the Canadian Jewish Book Award*Short-listed for the 2012 Giller Prize