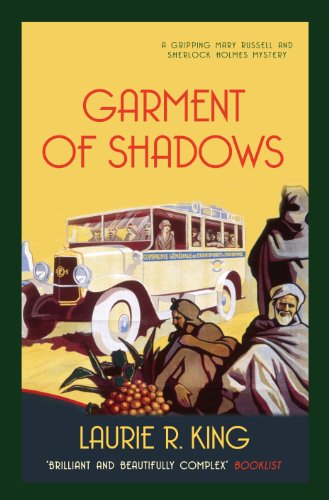 In a strange room in Morocco, Mary Russell is trying to solve a pressing mystery: Who am I? She has awakened with shadows in her mind, blood on her hands, and soldiers pounding at the door. Out in the hive-like streets, she discovers herself strangely adept in the skills of the underworld, escaping through alleys and rooftops, picking pockets and locks. She is clothed like a man, and armed only with her wits and a scrap of paper showing a mysterious symbol. Overhead, warplanes pass ominously north. Meanwhile, Holmes is pulled by two old friends and a distant relation into the growing war between France, Spain, and the Rif Revolt led by Emir Abd el-Krim — who could be a Robin Hood, or a power-mad tribesman. The shadows of war are drawing over the ancient city of Fez, and Holmes badly wants the wisdom and courage of his wife, whom he discovers, to his horror, has gone missing. As Holmes searches for her, and Russell searches for herself, each tries to crack deadly parallel puzzles before it's too late for them, for Africa, and for the peace of Europe.