Showing Behind the Veil by Shahzad Rizvi 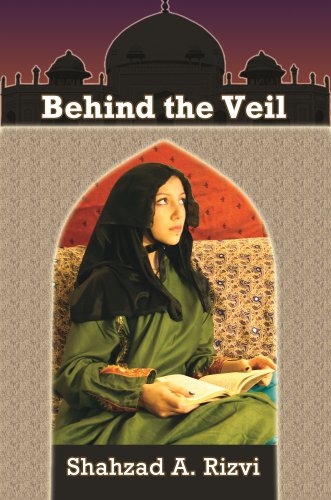 Rashida, a young woman from a large Indian Muslim family, sets her heart on marrying Nadim, an author whose work she admires, though they have never met. She turns down other proposals, insisting shell marry only Nadim, though his whereabouts and fate are uncertain. Years pass; India gains independence and Pakistan is created in a horrendous spasm of bloodshed and displacement.

When the author finally surfaces, he and Rashida are quickly married. It is immediately apparent that the marriage is a terrible mistake. Nadim is physically repulsive, irresponsible, and selfish. By his treachery, he nearly ruins Rashidas family. It is discovered that Nadim was already married with children when he claimed Rashida. She is plunged into despair.

Rashida begins an affair with a handsome and promising student, Shamim, and travels around India with him. His family, however, refuses to accept her as a daughter-in-law because she is older and has a "past." Though he loves Rashida, Shamim is torn between her and his family. He is tempted away from Rashidas side by an attractive and sensual Englishwoman. By the time he realizes that he has made a mistake, Rashida is lost to him forever.

Historical novel, romance, character study and family saga, this sweeping tale shows a changing India over a period of several decades in the middle of the 20th century. While much changes in Rashidas world, her loving family provides an anchor for her in the midst of political turmoil and personal upheaval. Rashidas growth from a starry-eyed teenager to a mature woman, bearing the scars of her experience, is the arc of the story, but along the way the reader is treated to a wealth of detail about India. The cultural traditions unique to India are illustrated on every page, but so are universal themes of resilience, love, and loyalty.