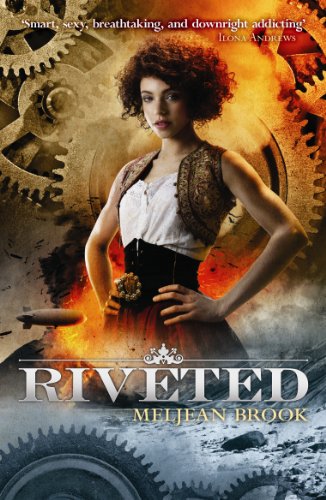 Meljean Brook, the New York Times bestselling author of The Iron Duke and Heart of Steel returns to the Iron Seas with a riveting new adventure of steampunk and passionate romance...

A century after a devastating volcanic eruption forced Iceland's inhabitants to abandon its shores, the island is enshrouded in legend. Fishermen tell tales of giant trolls guarding the land, and of seductive witches who steal men's hearts. But the truth behind the legends is mechanical, not magic - and the mystery of the island a matter of life and death for a community of women who once spilled noble blood to secure their freedom.

Five years ago, Annika unwittingly endangered that secret, but her sister Källa took the blame and was exiled. Now Annika serves on the airship Phatéon, flying from port to port in search of her sister, and longing to return home . . . but that home is threatened when expedition leader David Kentewess comes aboard.

Determined to solve the mystery of his own origin, David will stop at nothing to expose Annika's secrets. But when disaster strikes, leaving David and Annika stranded on a glacier and pursued by a madman, their very survival depends on keeping the heat rising between them - and generating lots of steam . . .

Riveted by Meljean Brook is steampunk romance at its very best . . . and steamiest.

Meljean Brook lives in Oregon with her family. She is the author of the Iron Seas steampunk series, which include The Iron Duke and Heart of Steel, and are also published by Penguin. For more information and Iron Seas extras, please visit www.meljeanbrook.com.