Showing The Good, the Bad & the Unlikely by Mungo MacCallum 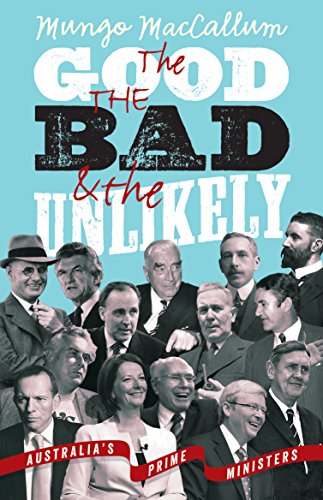 Since Australia’s birth in 1901, twenty-eight politicians have run the national show. Their time at the top has ranged from eight days for Frank Forde to eighteen years for Bob Menzies. But whatever the length of their term, each Prime Minister has a story worth sharing.

Edmund Barton united the bickering states in a federation; Billy Hughes forced US President Woodrow Wilson to take notice of Australia. The unlucky Jimmy Scullin took office days before Wall Street crashed into the Great Depression, while John Curtin faced the ultimate challenge of wartime leadership. John Gorton, Gough Whitlam and Paul Keating each shook up their parties’ policies so vigorously that none lasted much longer than a single term in office. Julia Gillard overthrew Kevin Rudd and Kevin Rudd overthrew Julia Gillard, thus paving the way for Tony Abbott.

With characteristic wit and expert knowledge, Mungo MacCallum brings the nation’s leaders to vivid life. The Good, the Bad and the Unlikely tells the tale of the many men and one woman who’ve had a crack at running the country. It is a wonderfully entertaining education.

‘This is the most informing and entertaining book about Australian politics since Don Watson’s Recollections of a Bleeding Heart.’ —Sydney Morning Herald

‘The irrepressible Mungo MacCallum has for decades been one of our most entertaining political journalists. This breezy book is vintage Mungo.’ —Australian

‘Informative and entertaining.’ —Inside Story

‘This book is packed with all the charm, wit and expert knowledge readers have come to expect from MacCallum’s writing.’ —Bookseller + Publisher

Mungo MacCallum is the author of The Good, the Bad and the Unlikely: Australia's Prime Ministers. He has long been one of Australia’s most influential and entertaining political journalists, in a career spanning more than four decades.