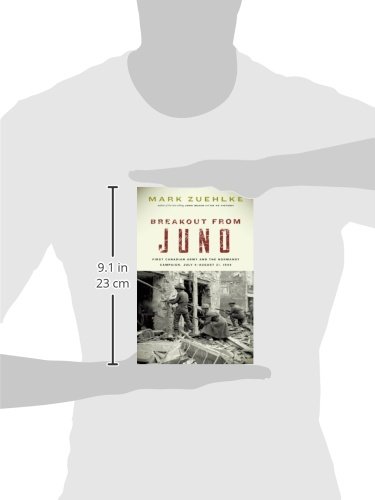 The ninth book in the Canadian Battle Series, "Breakout from Juno," is the first dramatic chronicling of Canada's pivotal role throughout the entire Normandy Campaign following the D-Day landings. On July 4, 1944, the 3rd Canadian Infantry Division won the village of Carpiquet but not the adjacent airfield. Instead of a speedy victory, the men faced a bloody fight. The Canadians advanced relentlessly at a great cost in bloodshed. Within 2 weeks the 2nd Infantry and 4th Armoured divisions joined coming together as the First Canadian Army. The soldiers fought within a narrow landscape extending a mere 21 miles from Caen to Falaise. They won a two-day battle for Verrieres Ridge starting on July 21, after 1,500 casualties. More bloody battles followed, until finally, on August 21, the narrowing gap that had been developing at Falaise closed when American and Canadian troops shook hands. The German army in Normandy had been destroyed, only 18,000 of about 400,000 men escaping. The Allies suffered 206,000 casualties, of which 18,444 were Canadians. "Breakout from Juno" is a story of uncommon heroism, endurance and sacrifice by Canada's World War II volunteer army and pays tribute to Canada's veterans.