Showing Princes of the North 1909 by Cindy Bouchard 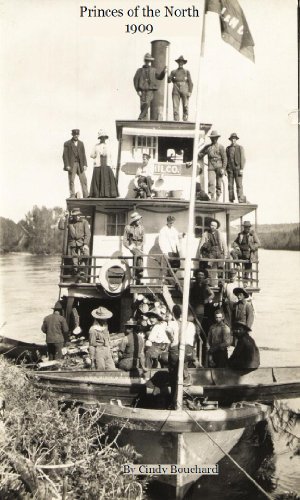 At the end of Canada’s first transcontinental railway lies the small coastal town of Vancouver, British Columbia.
Vancouver in 1909 is a town of contrasts. Its shady history still lives on in the dark alleys of its infamous streets: Hastings, Dupont, Harris and Granville. Vainly it strives for the respectability of its sister city, Victoria, the provincial capital and home to the famous Empress Hotel designed by Francis Rattenbury.
It is also the hometown of eighteen year old Jeffrey Hamilton, his younger sisters, Natalie and Heather, and younger brother, Billy.
Jeffrey’s plans for the future are to stay in Vancouver and run a prosperous hotel there someday. But when their father vanishes in the spring of 1909, he must instead provide for his beloved though sometimes exasperating family. To fulfill this obligation he now must embark into the forbidding North Country where more opportunities exist for ambitious young men than in the settled towns of the South.

British Columbia is different in many respects from every other province in the Dominion of Canada.
Ever since the Cariboo Gold Rush of 1858, the Hudson’s Bay Company has only maintained a tenuous grip on the province’s economy. And though the HBC’s paddlewheeler Beaver was the first steamer to work the inland rivers of British Columbia, grander ones, hailing from the Mississippi, or Pacific Ocean sternwheelers from San Francisco soon followed it.
The Americanization of BC’s rivers in the late 1800’s was only the beginning. Soon speculators from the States had arrived, buying land ahead of the Canadian Pacific Railway, gambling on the future prosperity of town-sites that were no more than stakes and ribbon in the wilderness. They not only saw treasures in gold at Barkerville and silver at Slocan but also in the beauty and wonder of the rich Okanagan Valley. And in the temperate coastal towns of Vancouver and New Westminster and the island beauty Victoria they predicted rich shipping ports; especially considering the construction of one of the great wonders of the world, the Panama Canal.
The northern half of the province was mostly ignored; in the early part of the twentieth century the largest communities were Port Essington and Hazelton.
However, that will all soon begin to change.
For now another train, the Grand Trunk Pacific, is racing towards the province from the East and the great wheels of progress have begun to roll again. This time the treasures lie in the vast and seemingly endless forest of the Central Interior and the tiny towns that huddle within it; Fort George, Smithers, Hazelton and dozens of others along the GTP’s proposed route: all of them destined to become the ‘Chicago of the North’ and all promising treasures of forestry, mining and agriculture.
And at the port of the infant town of Prince Rupert there are rumors of the richest fishing in the world and talk of a superior Asiatic Trade Route.
Fur is no longer king in British Columbia.
The trains brought the adventurers. And with them they brought their own traditions and their own Wild West. The last great frontier was about to be changed forever.