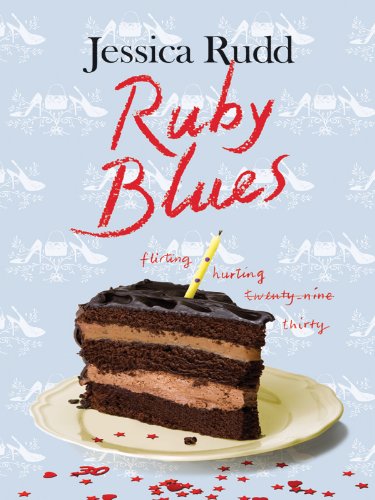 Ruby Stanhope is back, bigger and better than ever! - with more cocktail spills, more romantic thrills, more political skewerings and LOLs.

In Campaign Ruby, the very fabulous Ruby Stanhope got the Leader of the Opposition elected and fell in love with Luke.

Two years into his first term, the new PM is on the nose. And Luke is demanding romantic dinners at home rather than takeaway on the run.

What's a girl to do when she's about to turn thirty, when her wardrobe turns drab, her love life turns luke-warm and the government is leakier than a cheap umbrella? Can she find her inner Nancy Drew in time to save her boss? Will she succumb to temptation when Elliot, the hot vet, enters the scene?

Can she have it all? And, more importantly, what should she wear to the Midwinter Ball?

Jessica Rudd, 28, had three career changes in as many years - law, PR, politics - but is now going steady with her life as a writer. She hopes Ruby Blues, sequel to Campaign Ruby, will give her readers as many laughs as she had writing it. Jessica is based in Beijing.

'Ruby Blues is a delight to read. Beyond the laughs, it contains some serious messages for us (about our priorities) and for our leaders (about being themselves rather than just spouting predictable talking points). Will someone please buy the PM a copy?' Canberra Times

'Ruby Blues should serve to establish Jessica as an author of thoroughly fun and thoroughly female books. Ruby Blues is like The West Wing meets Marian Keyes: fast-talking through the corridors of power blended with putting-make- up-on-in-a-bike-taxi drama and work-life-balance calamity.' Sunday Mail Brisbane

'Rudd is a natural storyteller, one whose narrative and character construction reveal an underlying intelligence. There is substance behind the easy writing style.' Weekend Australian

'Ruby Blues is Allison Pearson (I Don’t Know Show She Does It) with parliament...Rudd should really have written At Home with Julia - she would have done a better job.' Sunday Age

'Ruby Blues is one of the best novels I've read this year. Easy to read, hard to put down, it has everything Campaign Ruby had plus more, namely a hunky veterinarian...Rudd's writing is witty, modern and on-trend with her target audience. If you love politics, chick lit, fashion and twitter, then this book is for you.' Examiner

'Laugh-out-loud moments abound: the scrapes, foibles and follies are hilarious: and the bitchiness is biting. Someone, please, grab the film rights.' Good Reading

'Hilarious, clever and sharp - this is one of my favourite books of 2011.' Sunday Star Times