Showing Escape From Ancient Egypt by A. K. Taylor 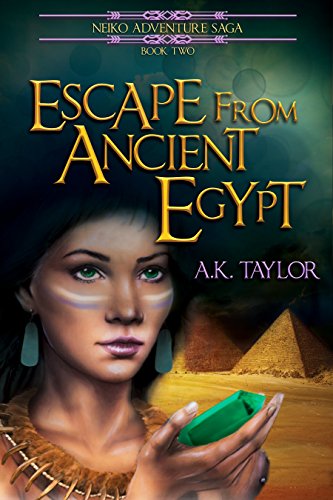 Finalist: Wisebear Digital Book Awards
Winner of the Bronze Medal Award and Best in YA Historical Fantasy in the 2013 Wisebear Book Awards!
Winner of the UP Authors Approved Award for the 2013 Fiction Challenge!
Praise for Escape from Ancient Egypt:

"Neiko has the potential for becoming a literary role model for young girls. The Escape From Ancient Egypt storyline is good conceptually with lots of action and we did find ourselves anxiously wanting to know how the author resolved Neiko's dilemna. Taylor also does a nice job of drawing the reader into the fictional world of ancient Egypt literally with her fantastic artwork interspersed throughout the novel."

"An exciting and action packed book from start to finish. This is the story of a young girl who travels between different times and places, and leads a life in each. Neiko finds herself in some scary and challenging situations in each place, and the book has a good amount of suspense as the reader awaits her next move. The writing is fantastical and highly imaginative, without being too far-fetched that the reader will lose interest."

"There is never a dull moment, and the book is punctuated with wonderful illustrations which break up the chapters. It reminds me of those books you read as a kid where you had to choose the ending and second guess what was coming.
~N Bookwitch 5 Stars

When being stuck in the past has a whole new meaning...

What if your worst enemy sent you on a one-way ticket to the past? Worse, later he shows up and tries to play match-maker with a dominant historical figure while all of history and the future on the line? Survival is just one problem, but then add your friends into the mix...
Following an intense battle between the Indians and the Crackedskulls, Neiko and her comrades enjoy victory while her enemies suffer a crushing defeat. Victory is short lived for Neiko when Francesco pays her a visit at her home and sends her away in order to collect on his threat of revenge. She is banished into the ancient world of ancient Egypt during the reign of Ramesses II the Great on a one way ticket.

Lost and trapped in this ancient world, it doesn't take very long for trouble to find her. Taken by a rich man, she is reunited with three her friends that had been missing, and an eleven-year-old mystery is finally solved, but one of Neiko's friends is still unaccounted for. After escaping from the rich man and journeying to Thebes,Neiko and her comrades have actually jumped from the pan and into the fire.

Things go horribly awry when Pharaoh finds out about Neiko and becomes infatuated with her. Francesco comes to Egypt on orders to bring her back, but he has other plans. Can Neiko and her friends thwart Francesco, return to the 21st century, and escape from the past and one of the greatest kings that ever lived?

If you love the action, adventure, and time travel intrigue of Back to the Future and Time Machine (except without the time machine) and modern Native Americans in ancient Egypt, but the story of the Ten Commandments and the Prince of Egypt in reverse with a battle of wills and the motives of passion from Pharaoh, you'll love Escape from Ancient Egypt!
**Looking for Book#1? Look under Neiko's Five Land Adventure