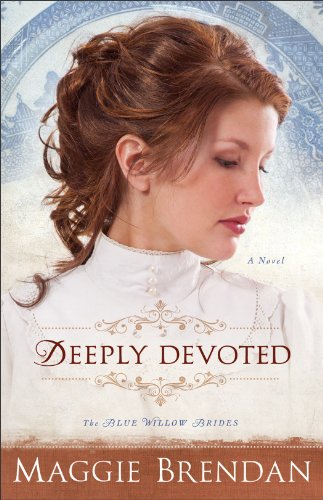 She is staking her future on a man she's never met. Can she learn to love him?

When Catharine Olsen leaves Holland for Wyoming as a mail-order bride, she brings some extra baggage with her: two sisters, her mother's set of Blue Willow china, and a tragic past. As she steps off the train, Peter Andersen is glad to see that she is everything her letters showed her to be. But he is a bit perturbed by her unexpected companions. How will he support them all? And what other secrets might Catharine be keeping from him?

Filled with sweet romance and vivid characters, Deeply Devoted highlights a clash of cultures as a highborn European and a simple wheat farmer learn to love one another and trust God with the past--and the future.


"Maggie Brendan has done it again. As gentle as a prairie breeze and as delicate as the Blue Willow china for which the series is named, Deeply Devoted is a tender and haunting tale that stirs heart and soul deeply--well beyond the last page."--Julie Lessman, author of the Daughters of Boston series and the Winds of Change series


Maggie Brendan is the bestselling author of several books, including the Heart of the West series and The Blue Willow Brides series. She was a 2013 finalist for the Published Maggie Award of Excellence, a 2013 finalist for the Heart of Excellence Readers' Choice Award, a 2012 finalist for Inspirational Reader's Choice award, and a recipient of the 2004 ACW Persistence Award in Atlanta. She is a member of the Author's Guild; Romance Writers of America; Faith, Hope, and Love; and Georgia Romance Writers. When she's not writing, she enjoys reading, researching for her novels, and spending time with her family. You can follow her at her blog www.SouthernBelleWriter.blogspot.com, and on Facebook and Twitter @MaggieBrendan.