Showing The Mirador: Dreamed Memories of Irene Nemirovsky by her Daughter by Elisabeth Gille 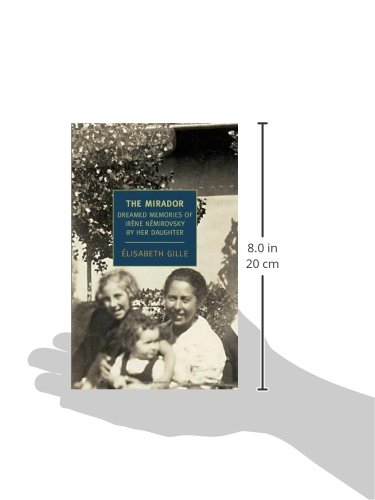 A New York Review Books Original When Irene Nemirovsky's "Suite Francaise" was first published, the world discovered a new great writer. Even in France, however, Nemirovsky had been more or less forgotten for years, until her youngest daughter elisabeth Gille, only five years old when her mother died in Auschwitz, wrote a book to bring her back to life. In 1992 Gille published this fictionalized autobiography of her mother, who had led a sparkling life in Paris as one of the most successful and prolific European 1930s writers before being arrested as a Jew and led to her death in 1942. In the first section of the book, Irene looks back from 1929, the year of her first triumph with David Golder, to her privileged upbringing in Kiev and Saint Petersburg, the precocious only child of a warm, generous father and a vicious, preening, and distant mother. The family escapes Revolutionary Russia to arrive in France, a country of "moderation, freedom, and generosity" that Irene will embrace as her own. In the book's second half, the writer, her husband and two children have fled Paris for a small town in Burgundy, where they must wear the yellow Star of David, come to some accommodation with the occupying German troops, and plead in vain with Irene's illustrious fair-weather champions to intercede on the family's behalf. She now sees her earlier self as vain and credulous, blinded by her success to the horribly changing political situation, but it is too late. As fully and deeply imagined as Irene Nemirovsky's novels, Gille's "memoires revees" will also prove indispensable to devotees of the nearly forgotten author for the new light it sheds on her.