Showing From Barcelona - Stories Behind the City, Second Edition by Jeremy Holland 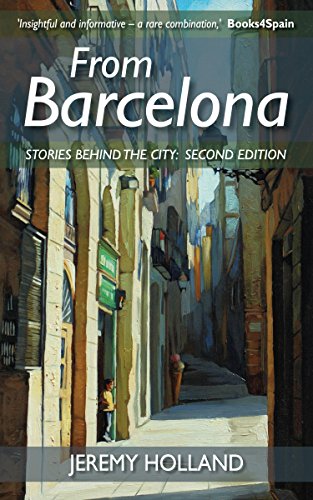 Dubbed, “The Great Enchantress,” by art critic Robert Hughes, Barcelona was seducing visitors long before the city’s rise to a tourist hotspot following the Olympic Games in 1992. Pablo Picasso, Ernest Hemingway and George Orwell are the famous names who at one time called the Catalan capital home. But for every historical figure there have been hundreds of others who have been charmed by its character and splendor.

From Barcelona is a short story collection inspired by this cryptic city, its people and its buildings. Visit a haunted flat within shouting distance of a leafy square and meet a comely witch, big nose and all. Go back in time to when Antoni Gaudí struggled to realize his divine designs until a meeting with his benefactor, Eusebi Güell. Discover the legend behind the figurine of a man squatting with his belt around his ankles that the locals hide in the Nativity Scene for good luck. Immerse yourself in the characters and scenery of this Mediterranean metropolis and experience a world of books, dragons and roses.

“Colorful and unique stories about Barcelona written by an expat author with his finger on the pulse of the city. He manages to capture both the vitality and the mysteriousness of the capital of Catalunya in a fresh and entertaining way.”
Carlos Carbonell, ADN Newspaper, Barcelona

“This series of short stories not only captures the essence of modern Barcelona from the perspective of the Catalan’s themselves and foreigners living and working there but also provides valuable historical lessons.”
Rod Younger, www.books4spain.com

“Enjoyable, well-written and entertaining stories for everyone from the tourist to the expat to the native. Recommended for distant lovers of Barcelona like myself and locals too!”
Bart Van Poll, founder, Spotted by Locals City blogs

“A must read, must have for tourists and expats alike. Every story is fascinating. You'll get so much more out of your stay than from an infoseek guide book.”
Rosie Reay, author, book critic, Catalunya Chronicle