Showing Against All Enemies by Tom Clancy 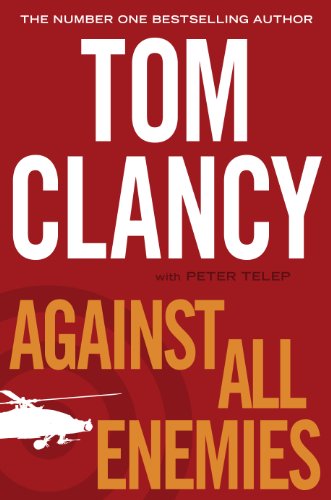 Against All Enemies is the first Max Moore novel by bestselling author, Tom Clancy.

When Ex-Navy SEAL and CIA operative Maxwell Moore barely survives a prisoner exchange that goes explosively wrong off the coast of Pakistan, he realises that powerful, cunning forces have been marshalled against him. Determined to dig out the truth, he uncovers a shocking conspiracy.

The two greatest threats to U.S. security have forged an unholy alliance. For the Mexican drug cartel, it means money, power, and control of the drug trade. But for the Taliban, it is an opportunity to bring the fire of jihad to the heartland of the infidel.

Now Moore and his depleted team must infiltrate the drug cartel in the hunt for terrorists preparing to bring destruction to America's streets.

From the remote, war-scarred landscapes of the Middle East to the blood-soaked chaos of the U.S.-Mexico border, Tom Clancy delivers a heart-stopping thriller you won't forget.

In Against All Enemies Tom Clancy introduces Max Moore, a character set to join Jack Ryan as one of the great heroes of modern thriller writing. Previous Jack Ryan titles include Locked On and Dead or Alive.

Thirty years ago, Tom Clancy was a Maryland insurance broker with a passion for naval history. His first novel, The Hunt for Red October, catapulted on to the New York Times bestseller list after President Reagan pronounced it 'the perfect yarn'. Since then Clancy has established himself as an undisputed master at blending exceptional realism and authenticity, intricate plotting and razor-sharp suspense.

Peter Telep is a New York Times bestselling author who has written almost forty novels spanning many genres. A produced screenwriter, he teaches creative writing, fiction writing and script-writing courses at the University of Central Florida.