Showing To the Hermitage by Malcolm Bradbury 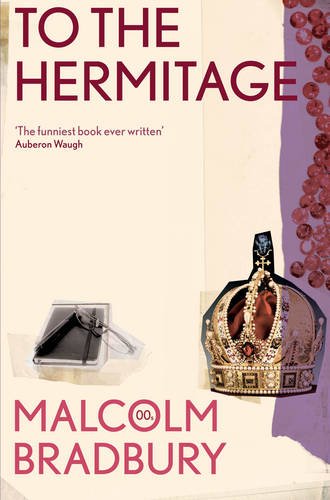 To The Hermitage is Sir Malcolm Bradbury's first novel in nearly a decade, and its length and ambition provide some clue as to why it has been so long in the making. The novel begins with the arrival of the great Enlightenment philosopher Denis Diderot at the Russian court of Catherine the Great, who is "drawn to grand ideas and learning; she looks to Paris" and to Denis Diderot, busily completing his Encyclopaedia, the great work of the European "Age of Reason". Bradbury's world of "Then" suddenly cuts to "Now", and the arrival in Stockholm in 1993 of the narrator, a thinly veiled self-portrait of a weather-beaten novelist and literary critic who has been invited on a "Baltic junket", an academic gathering to discuss the Diderot Project, a Swedish-funded enterprise to investigate the life and works of the great philosopher. Bradbury extracts maximum hilarity from the ensuing academic pondering of the assembled scholars, including the wonderful deconstructionist professor "Jack-Paul Verso, in Calvin Klein jeans, Armani jacket, and a designer baseball cap saying I LOVE DECONSTRUCTION". The group's academic sparring takes on added poignancy as footage of the hardline coup to overthrow Gorbachev and silence Yeltsin flashes onto their TV screens.

Bradbury's novel proceeds to deftly seesaw between the Age of Reason championed by Diderot and the present so-called end of history and "triumph" of global capitalism. It ruefully, but also very humorously reflects on the perils of intellectual idealism then and now, and explores the ways in which "history is the lies the present tells in order to make sense of the past". Sprawling, messy, hugely ambitious and at times very funny, To The Hermitage is up there with Eating People is Wrong and Rates of Exchange as one of Bradbury's better pieces of fiction. --Jerry Brotton