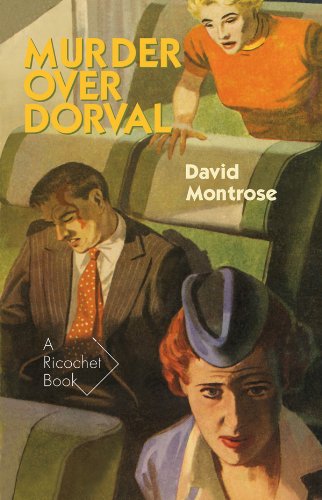 By the author of The Crime on Cotes des Neiges, this is the second title in the Véhicule Press Ricochet series of hard-boiled detective novels set in Montreal. Originally published in 1952, Murder Over Dorval follows the investigations of hard-drinking, seasoned private dick, Russell Teed.

In one hand she held a plane ticket for Montreal, in the other, a wad of greenbacks. She was a gorgeous looking redhead. For the sake of her lovely green eyes, Russell Teed took the plane and the money. But it wasn’t long before he realized that whatever she had offered it wasn’t worth it. A razor slash on his leg, a slug in his shoulder and the knowledge that three tough customers were gunning for him meant that Russell Teed Investigations were going to have to finish up their investigations, but quick. Readers of The Crime on Cote des Neiges will know that in a spot like this a Russell Teed adventure is really just climbing into high gear. With a background of Montreal and New York and some pretty terrific action, Murder Over Dorval is definitely Grade A entertainment.