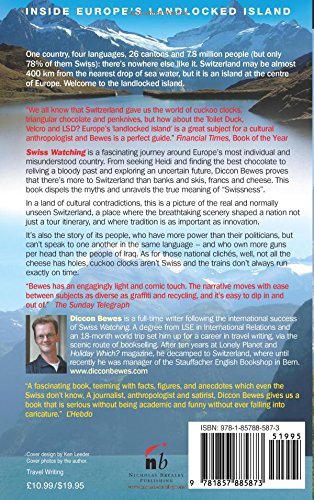 FINANCIAL TIMES BOOK OF THE YEAR One country, four languages, 26 cantons, and 7.8 million people (but only 78% of them Swiss): there's nowhere else in Europe like it. Switzerland may be almost 400 km from the nearest drop of seawater, but it is an island at the centre of Europe. Welcome to the landlocked island. 'Swiss Watching' is a fascinating journey around Europe's most individual and misunderstood country. From seeking Heidi and finding the best chocolate to reliving a bloody past and exploring an uncertain future, Diccon Bewes proves that there's more to Switzerland than banks and skis, francs and cheese. This book dispels the myths and unravels the true meaning of 'Swissness'. In a land of cultural contradictions, this is a picture of the real and normally unseen Switzerland, a place where the breathtaking scenery shaped a nation not just a tour itinerary, and where tradition is as important as innovation. It's also the story of its people, who have more power than their politicians, but can't speak to one another in the same language - and who own more guns per head than the people of Iraq.As for those national cliches, well, not all the cheese has holes, cuckoo clocks aren't Swiss and the trains don't always run exactly on time.