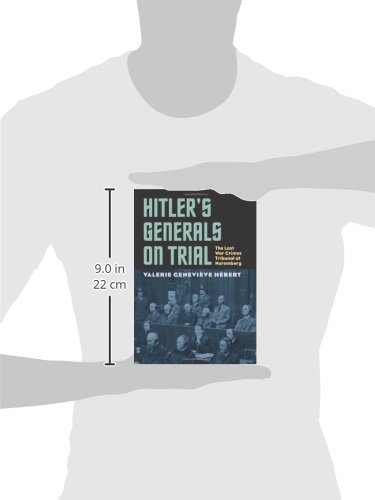 By prosecuting war crimes, the Nuremberg trials sought to educate West Germans about their criminal past, provoke their total rejection of Nazism, and convert them to democracy. More than all of the other Nuremberg proceedings, the High Command Case against fourteen of Hitler's generals embraced these goals, since the charges--the murder of POWs, the terrorizing of civilians, the extermination of Jews--also implicated the 20 million ordinary Germans who had served in the military. This trial was the true test of Nuremberg's potential to inspire national reflection on Nazi crime. Its importance notwithstanding, the High Command Case has been largely neglected by historians. Valerie Hebert's study--the only book in English on the subject--draws extensively on the voluminous trial records to reconstruct these proceedings in full: prosecution and defense strategies; evidence for and against the defendants and the military in general; the intricacies of the judgment; and the complex legal issues raised, such as the defense of superior orders, military necessity, and command responsibility. Crucially, she also examines the West German reaction to the trial and the intense debate over its fairness and legitimacy, ignited by the sentencing of soldiers who were seen by the public as having honorably defended their country. Hebert argues that the High Command Trial was itself a success, producing eleven guilty verdicts along with an incontrovertible record of the German military's crimes. But, viewing the trial from beyond the courtroom, she also contends that it made no lasting imprint on the German public's consciousness. And because the United States was eager to secure West Germany as an ally in the Cold War, American officials eventually consented to parole and clemency programs for all of the convicted officers, so that by the late 1950s not one remained imprisoned. Superbly researched and impeccably told, Hitler's Generals on Trial addresses fundamental questions conce