Showing The Spectacular State: Culture and National Identity in Uzbekistan by Laura Adams 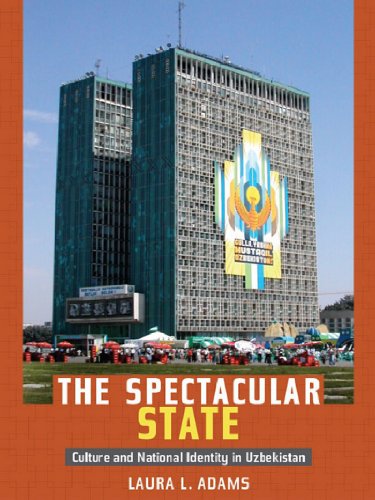 Laura L. Adams offers unique insight into nation building in Central Asia during the post-Soviet era through an exploration of Uzbekistan’s production of national culture in the 1990s. As she explains, after independence the Uzbek government maintained a monopoly over ideology, exploiting the remaining Soviet institutional and cultural legacies. The state expressed national identity through tightly controlled mass spectacles, including theatrical and musical performances. Adams focuses on these events, particularly the massive outdoor concerts the government staged on the two biggest national holidays, Navro’z, the spring equinox celebration, and Independence Day. Her analysis of the content, form, and production of these ceremonies shows how Uzbekistan’s cultural and political elites engaged in a highly directed, largely successful program of nation building through culture.

Adams draws on her observations and interviews conducted with artists, intellectuals, and bureaucrats involved in the production of Uzbekistan’s national culture. These elites used globalized cultural forms such as Olympics-style spectacle to showcase local, national, and international aspects of official culture. While these state-sponsored extravaganzas were intended to be displays of Uzbekistan’s ethnic and civic national identity, Adams found that cultural renewal in the decade after Uzbekistan’s independence was not so much a rejection of Soviet power as it was a re-appropriation of Soviet methods of control and ideas about culture. The public sphere became more restricted than it had been in Soviet times, even as Soviet-era ideas about ethnic and national identity paved the way for Uzbekistan to join a more open global community.