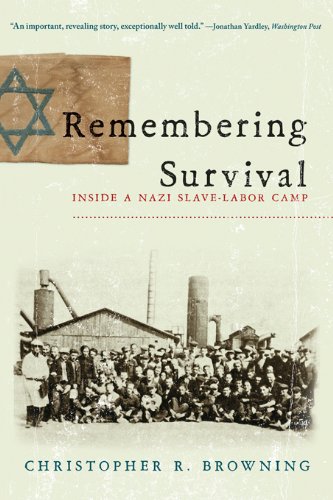 Employing the rich testimony of almost three hundred survivors of the slave-labor camps of Starachowice, Poland, Christopher R. Browning draws the experiences of the Jewish prisoners, the Nazi authorities, and the neighboring Poles together into a chilling history of a little-known dimension of the Holocaust. Brutal and deadly in their living and work conditions, these camps represented the only chance of survival for local Jews after the ghetto liquidations of 1942. There they produced munitions for the German war effort while scrambling to survive murderous and corrupt camp regimes and desperately trying to protect children, spouses, parents, and neighbors. When the labor camps closed in the summer of 1944, the surviving Starachowice Jews still had to confront Auschwitz and then the reprisals of anti-Semitic Polish neighbors. Combining harrowing detail and insightful analysis, Browning's history is indispensable scholarship and an unforgettable story of survival.