Showing The Prophecy of Zephyrus by G. A. Hesse 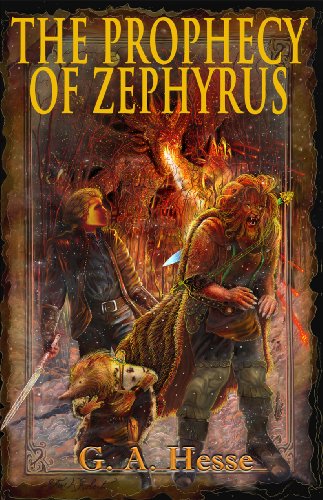 This fantasy novel, written by G.A. Hesse, is about Oberon (Obie) Griffin, a modern day 17-year-old who believes he's a jinx. During a trip to Ghostrise Valley he's picked up by a spirit comet and whisked back in time to the Kingdom of Windermere during the time of magic. It's a time of dragons and kings, of sorcerer's, elves, and many strange creatures. Obie first meets the beautiful Gabrielle of the noble House of Brynnen and her windlord, Mara, a winged white horse. They are the Moonpath Riders and Guardians of The Star Crystals, two crystals of power. He soon learns the world is being destroyed by black magic, and according to an old prophecy, he is to play a key part in an attempt to save it. But he must accept the role of The Protector of the Moonpath Riders. Obie is an angry and insecure youth and does not believe he could be the one in the prophecy; bringing him to Windermere had to have been a mistake. Confused, he must decide whether to accept the role of Protector, or try and return to the safety of his own time---if it still exists.

When Gabrielle and Mara are abducted, Obie makes a quick decision that hurls him into an epic journey with two unlikely companions. Together they pass through gloomy oak forests, deep river valleys, subterranean caverns, and highland blizzards on their way to the evil land of Targus Dol. Along the way they encounter fierce warriors spawned by black magic, Zelda the River Witch, enemy goblins and others. But the worse is yet to come, for it dawns on Obie that he must soon defend Gabrielle against the King of Darkness in a battle to save the earth---and the soul he thinks he's lost.