Showing To the Tashkent Station: Evacuation and Survival in the Soviet Union at War by Rebecca Manley 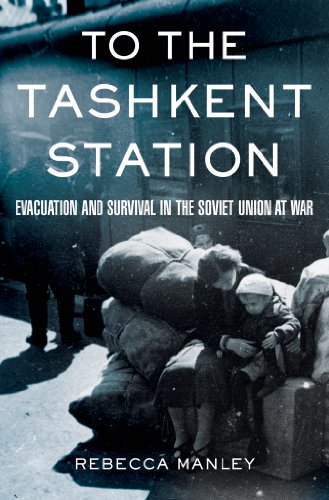 In summer and fall 1941, as German armies advanced with shocking speed across the Soviet Union, the Soviet leadership embarked on a desperate attempt to safeguard the country's industrial and human resources. Their success helped determine the outcome of the war in Europe. To the Tashkent Station brilliantly reconstructs the evacuation of over sixteen million Soviet civilians in one of the most dramatic episodes of World War II.

Rebecca Manley paints a vivid picture of this epic wartime saga: the chaos that erupted in towns large and small as German troops approached, the overcrowded trains that trundled eastward, and the desperate search for sustenance and shelter in Tashkent, one of the most sought-after sites of refuge in the rear. Her story ends in the shadow of victory, as evacuees journeyed back to their ruined cities and broken homes. Based on previously unexploited archival collections in Russia, Ukraine, and Uzbekistan, To the Tashkent Station offers a novel look at a war that transformed the lives of several generations of Soviet citizens. The evacuation touched men, women, and children from all walks of life: writers as well as workers, scientists along with government officials, party bosses, and peasants. Manley weaves their harrowing stories into a probing analysis of how the Soviet Union responded to and was transformed by World War II.

Over the course of the war, the Soviet state was challenged as never before. Popular loyalties were tested, social hierarchies were recast, and the multiethnic fabric of the country was subjected to new strains. Even as the evacuation saved countless Soviet Jews from almost certain death, it spawned a new and virulent wave of anti-Semitism. This magisterial work is the first in-depth study of this crucial but neglected episode in the history of twentieth-century population displacement, World War II, and the Soviet Union.