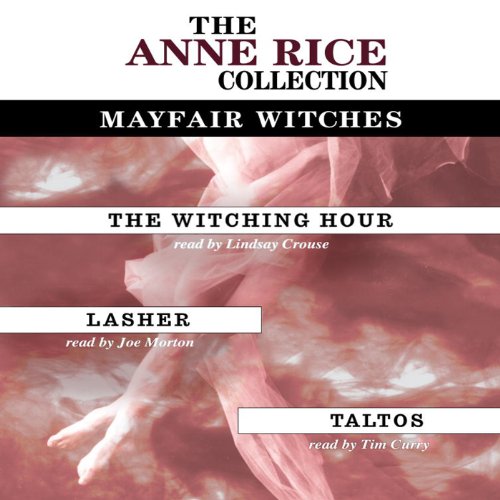 You'll love this collection of three Anne Rice favorites at a bargain price.

The Witching Hour: Demonstrating once again her gift for spellbinding storytelling, Anne Rice makes real a family of witches - a family given to poetry and incest, to murder and philosophy, a family that is itself haunted by a powerful, dangerous and seductive being.

Lasher: Now, Anne Rice brings us again - even more magically - into the midst of the dynasty of witches she introduced in The Witching Hour.

At the center of Lasher: the brilliant and beautiful Rowan Mayfair, queen of the coven, and Lasher, the darkly compelling demon whom she finds irresistible and from whose evil spell and vision she must now flee. She takes with her their terrifying and exquisite child, one of "a brood of children born knowing, able to stand and talk on the first day."

Rowan's attempt to escape Lasher and his pursuit of her and their child are at the heart of this extraordinary saga. It is a novel that moves around the globe, backward and forward through time, and between the human and demonic worlds. Its many voices - of women, of men, of demons and angels, present and past - haunt and enchant us. With a dreamlike power, the novel draws us through twilight paths, telling a chillingly hypnotic story of occult and spiritual aspirations and passion.

Taltos: What can I confess? I'm Ashlar. I'm a Taltos.

When Ashlar learns that another Taltos has been seen, he is suddenly propelled into the haunting world of the Mayfair family, the New Orleans dynasty of witches forever besieged by ghosts, spirits, and their own dizzying powers. For Ashlar knows this powerful clan is intimately linked to the heritage of the Taltos.In a swirling universe filled with death and life, corruption and innocence, this mesmerizing novel takes us on a wondrous journey back through the centuries to a civilization half-human, of wholly mysterious o...