Showing What the body remembers by Shauna Singh Baldwin 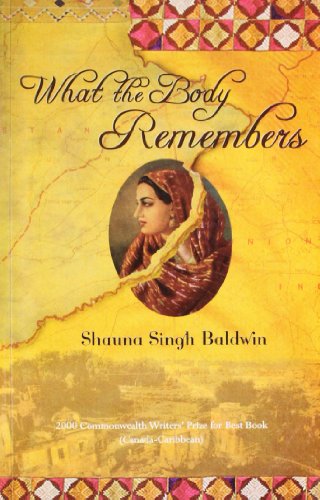 No, no child is an innocent. Especially not a girl-child. Why, men of every colour and creed find blame in girls for rain that comes or doesn't come, but mostly, men blame girls for living.

. It is 1938 in the Indian Punjab and Sikh couple Satya and Sardarji have been childless for many years. So, although Satya is still beautiful at 42, her well-born husband has taken another younger wife, Roop. What the Body Remembers follows the evolving relationships between the three: the older woman's intense jealousy of and ultimate cruelties towards the younger (who innocently believes she has found her salvation through this marriage); the fears and vulnerabilities of the newcomer as she desperately tries to please; the expediency of the man. The tension intensifies as the two women find very different ways of coping with their predicament. These central relationships cast shadows on other characters who crowd onto the page, giving the novel colour and vibrant life. The men--particularly Sardarji--sometimes seem two-dimensional but they too are trapped by the expectations made of them.

Most of all, the novel makes flesh its social and political backdrop--the pluralist India of 1938 moving towards and through its independence: "Hindus, Sikhs, Muslims, they are like the three strands of [Roop's] hair, a strong rope against the British, but separate nevertheless". The country as described is complex, seething and sometimes violent and the descriptions are disturbingly beautiful. What the Body Remembers is powerful, evocative and affecting. It is both a vivid account of a pivotal period of the history of India and a moving portrayal of what survival entailed for the women of that society. --Christina McLoughlin