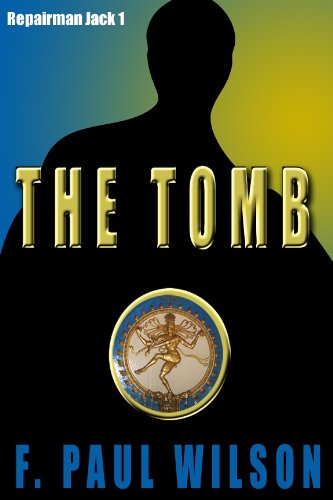 The novel that started it all.

F. Paul Wilson wrote THE TOMB as a one-shot, never intending to carry it further. But its protagonist, Repairman Jack, struck a resounding chord with readers. The novel never went out of print and Jack's fans grew to be legion.

Jack lives under the radar, with no official identity. He makes his living fixing situations that the system can't handle, or the system has caused. Along the way he becomes a reluctant combatant in a cosmic shadow war that threatens the very nature of reality.

Who do the world’s most exciting authors turn to when they need a shot of adrenaline?

“Repairman Jack is one of my favorite characters—I’m full of happy anticipation every time I hold a new RJ novel in my hands.”
—Charlaine Harris, creator of True Blood

“The Tomb is one of the best all-out adventure stories I’ve read in years.”
—Stephen King

Repairman Jack is one of the most original and intriguing to arise out of contemporary fiction in ages. His adventures are hugely entertaining.
—Dean Koontz

F. Paul Wilson is a hot writer, and his hottest and my favorite creation is Repairman Jack.
—Joe R. Lansdale

“F. Paul Wilson’s Repairman Jack is a cultural icon. If you haven’t crossed paths with him you’re out of the loop. Get with the program.”
—David Morrell, creator of Rambo.

Repairman Jack is one of the greatest fictional characters created by any thriller writer in the past half century. If you haven't discovered him and his world yet, what a fabulous, extraordinary, and electric reading experience awaits you.
—Douglas Preston, co-creator of the Pendergast novels

"I'm a Repairman Jack addict. Be warned: Read one book and you'll become one, too. If you've got an impossible problem to solve, he's the one guy you want in your corner: flawed, conflicted, and oh-so-wonderfully brutal. Each book is a sweet hit of pure adrenaline. Pick up a copy and get hooked today."
—James Rollins, New York Times bestseller of The Doomsday Key