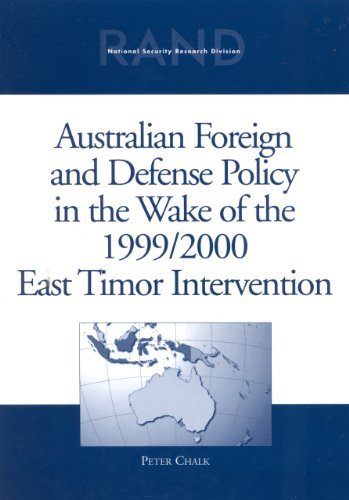 In late 1999, Australia undertook its most significant external militaryoperations since the Vietnam War--the intervention to stem the violence andbloodshed following East Timor_s August 1999 vote to separate fromIndonesia. This book examines key developments leading to the deployment ofthe International Peacekeeping Force for East Timor (INTERFET) and assessesthe impact of this intervention on Canberra_s future defense, security, andforeign policy planning. The author finds that future Australian-Indonesianrelations are unlikely to exhibit the cordiality of Prime Minister PaulKeating_s era, but will instead be guided by a more-businesslike and frankstyle of engagement. The author also finds that the 2000 Defence WhitePaper, which was issued in the aftermath of the INTERFET intervention toprovide a long-term plan for restructuring Australia_s armed forces forrapid deployments to areas of regional unrest, is both ambiguous andopen-ended. A defense review like the white paper could result in aresource-deprived force structure, contribute to a somewhat confusedSoutheast Asian policy, and generate unfounded expectations of whatAustralia is able and willing to do in terms of its alliance commitmentswith the United States and associated contributions to coalition warfare.