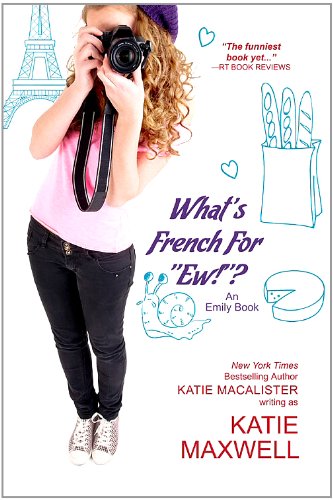 Spring break arrives, and that means it’s time for Emily to brush up on her sadly lacking French language skills. Emily, however, has much more important plans for her time—she is determined to keep the interest of her boyfriend Devon, and what better place to storm his Bastille than Paris?

Unfortunately her attempts to conquer strange French cuisine, Devon—and oh, yes, there’s that little thing about learning the language—end up in …well, let’s just call it The French Revolution II and leave it at that.

Subject: Emily’s Handy Phrases For Spring Break in Paris
From: Em-the-enforcer@englandrocks.com
To: Dru@seattlegrrl.com

Vous etes nummy, mais mon petit ami est le roi des hotties, et il vient a Paris seulement pour me voir! You are nummy, but my boyfriend is the king of hotties, and he’s coming to Paris just to see me!

"Gripping, smart-alecky, shocking...and at the same time, tender. A brilliant debut by Katie Maxwell in the Young Adult Forum." - KLIATT

"Fans of The Princess Diaries and other well written teen books will cheer this new entry to the scene." - Huntress Reviews

"Girls will laugh, sigh and squeal aloud as they embark upon Emily's journey." - Romantic Times BOOKClub