Showing In Tangier by Mohamed Choukri 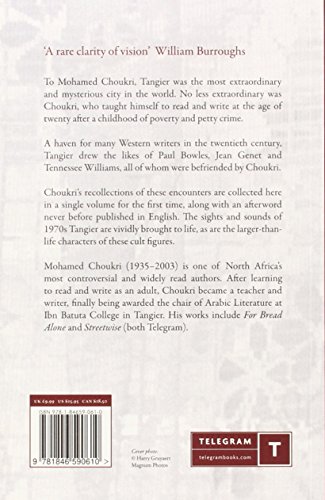 "As I read Choukri's notes, I saw and heard Jean Genet as clearly as if I had been watching a film of him. To achieve such precision simply by reporting what happened and what was said, one must have a rare clarity of vision."—William Burroughs, from the introduction to Genet in Tangier

Tangier, "the most extraordinary and mysterious city in the world," according to Mohamed Choukri, was a haven for many Western writers in the early twentieth century. Paul Bowles, Jean Genet, and Tennessee Williams all spent time there, and each was in turn befriended by Choukri.

Collected here in one volume, for the first time in English, are his delightful recollections of these encounters, offering a truly fresh and unpretentious insight into the lives of these cult figures. Includes an afterword by Choukri previously published only in French.

As we walked, I showed Tennessee the Arabic translation of his play, and explained that the title in Arabic meant: A cat on the fire. I added that several of his plays, both full-length and one-acters, had been published in Arabic, as well as some of his short stories. I heard his noisy laugh for the first time. Many books, many boys!

Mohamed Choukri (1935–2003) is one of North Africa's most controversial and widely read authors. After a childhood of poverty and petty crime, Choukri learned to read and write at the age of twenty. He then became a teacher and writer, finally being awarded the chair of Arabic literature at Ibn Batuta College in Tangier.